Paralympic Games is Going On in Rio.

Paralympic Games is Going On in Rio..... 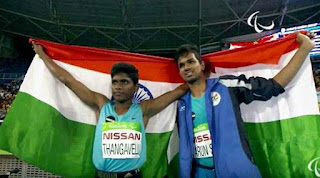 Paralympics participants Mariyappan Thangavelu (L) and Varun Singh Bhati with the Indian flag after winning gold and bronze medals respectively in the men’s high jump event in Rio on 9 Sept 2016.

The Paralympics has grown from a small gathering of British World War II veterans in 1948 to become one of the largest international sporting events by the early 21st century. Paralympians strive for equal treatment with non-disabled Olympic athletes, but there is a large funding gap between Olympic and Paralympic athletes.

The Paralympic Games are organized in parallel with the Olympic Games, while the IOC recognized Special Olympics World Games include athletes with intellectual disabilities, and the Deaflympics include deaf athletes.

Given the wide variety of disabilities that Paralympic athletes have, there are several categories in which the athletes compete. The allowable disabilities are broken down into ten eligible impairment types. The categories are impaired muscle power, impaired passive range of movement, limb deficiency, leg length difference, short stature, hypertonia, ataxia, athetosis, vision impairment and intellectual impairment. These categories are further broken down into classifications, which vary from sport to sport. The classification system has led to cheating controversies revolving around athletes who over-stated their disabilities, in addition to the use of performance-enhancing drugs.