What are some amazing facts about Google or Microsoft?

We have all come across the ubiquitous captcha - the colourful images with distorted text - a reverse Turing test of sorts. These work because no algorithm at present can read distorted text as well as we humans do. However not all the distorted texts are unreadable by machines. About 200 million captchas are solved everyday, amounting to more than 150,000 hours of work each day. Considering the numbers involved, a safe captcha generation system was needed. Enter Google reCAPTCHA. To make a positive use of this immense human effort, the reCAPTCHA channels the effort spent solving captcha online into "reading" books. 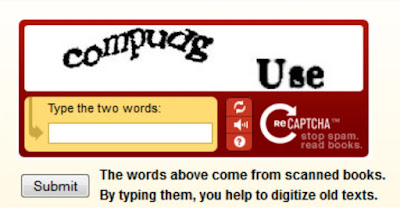 To archive human knowledge and to make information more accessible to the world, multiple projects are digitizing physical books that were written before the computer age. The book pages

are photographically scanned, and then transformed into text using "Optical Character Recognition" (OCR). The transformation into text is useful because scanning a book produces images, which are difficult to store on small devices, expensive to download, and cannot be searched. The problem is that OCR is not perfect.

But if a computer can't read such a CAPTCHA, how does the system know the correct answer to the puzzle? Here's how: Each new word that cannot be read correctly by OCR is given to a user in conjunction with another word for which the answer is already known. The user is then asked to read both words. If they solve the one for which the answer is known, the system assumes their answer is correct for the new one. The system then gives the new image to a number of other people to determine, with higher confidence, whether the original answer was correct.

The system has been reported as displaying over 100 million CAPTCHAs every day, and among its subscribers are such popular sites as Facebook, TicketMaster, Twitter, 4chan,CNN.com, Craigslist, and StumbleUpon. The Google reCAPTCHA project is astonishingly elegant and amazingly simple!

The reCAPTCHA was originally created by Luis von Ahn, Ben Maurer, Colin McMillen, David Abraham and Manuel Blum. Google acquired it on September 16, 2009 for $27 million. Thanks to Aniruddha for pointing it out in the comments.

Sometimes you wonder if they should have kept the entire project details a secret, though Google issued a statement saying that any such attack to misuse the reCAPTCHA project would require much greater numbers.