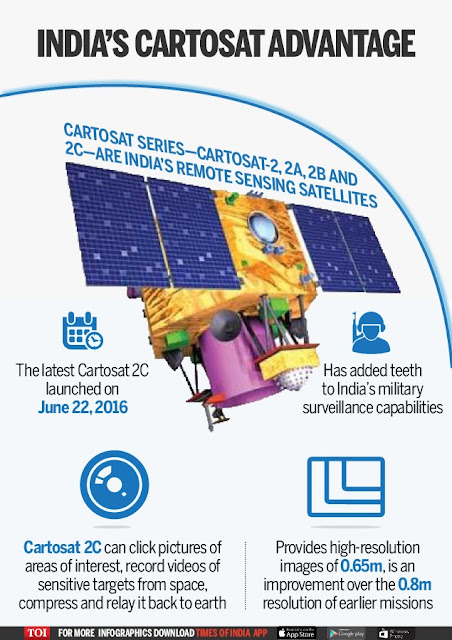 In what's being described as the first major use of the Cartosat family of satellites, the last one (2c) launched in June this year, sources in Isro said that the armed forces were aided by high-resolution images for the surgical strikes+ conducted across the line of control+ (LoC) in the small hours of 29th September.

A source in Isro said: "We've been providing images to the armed forces, the army in particular. While I cannot comment if any specific image was sent on a particular day in the previous week, I can say that Cartosat images are meant for this purpose and the army has used this."

Both Isro and the Ministry of Defence (MoD) have largely remained tight-lipped about the uses of the Cartosat family of satellites—which experts call India's 'eye in the sky'—built for dual use.

The Cartosat-2C in particular added more teeth to India's military surveillance and reconnaissance capabilities, and has been providing high resolution images of 0.65 metres, an improvement over the 0.8m resolution of the earlier missions.

"Cartosat also provided Area of Interest (AOI) based images for the armed forces," the source said. Another explained that based on requests, one or more scenes/images covering the AOI as specified is provided in as a single polygon (all the areas in one circle) in the form of a shapefile (non-topological geometry and attribute information for the spatial features).

According to the National Remote Sensing Centre (NRSC) in Hyderabad, AOI products are of two types—standard and precision-based ortho (where images taken from space are corrected to have an uniform scale—both of which are useful for the armed forces. Ortho rectified products are corrected for terrain distortions and camera tilt effects.

And, the Cartosat-2C is the best in the class that India boasts of although countries like the US and Israel boast of better ones. This satellite can not only click pictures of areas of interest, but also record videos of sensitive targets from space, compress it, and relay it back to earth.


Demonetisation an Idea and Implementation!!
23 Nov 2016 Now its Indian Eye in the Sky- Cartosat images during Surgical Strike
30 Sep 2016 CONFUSING G.K POINTERS
27 Sep 2016 Free GS session with KICA-Kiran Prakashan Pvt Ltd at Mukherjee Nagar-DELHI
06 Aug 2016 UPSC-Continental-Drift-Theory-in-Detail-Kiran-Institute-of-Career-Achievements
15 Jun 2016 UPSC-Continental-Drift-Theory-in-Detail-Kiran-Institute-of-Career-Achievements
15 Jun 2016 World Hypertension Day being observed today
17 May 2016 Some bizarre Facts you may not know-www.KICAonline.com
05 Mar 2016 How Bluetooth Gets its Name-www.KICAonline.com
05 Mar 2016 What are some bizarre facts about India that seem total lies but are actually true?
03 Feb 2016 If-you-are-using-Packaged-Drinking-water-then-this-article-certainly-needs-your-ATTENTION!!
30 Jan 2016 If-you-are-using-Packaged-Drinking-water-then-this-article-certainly-needs-your-ATTENTION!!
30 Jan 2016 Major Points to Remember about Census of India for All Competitive Exams.
30 Jan 2016 Important-Defence-Exercises-Between-India-and-World
25 Jan 2016 What-is-LED-light-emitting-diode
20 Jan 2016 Modi-woos-startups-India-offers-them-3-years-tax-break
17 Jan 2016 Amazing-Facts-about-India-www.kicaonline.com
16 Jan 2016 15-January-Happy-Army-Day
15 Jan 2016 WhatsApp crossed 1Billion downloads on Android with 4 engineers-That's what Brain can do with Technology
12 Jan 2016 What are some of the fascinating facts about Maharajas Express?
08 Jan 2016